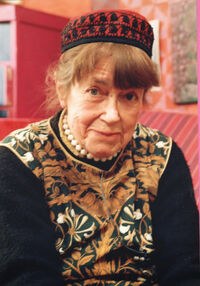 Best known for her industrial designs, tiles and wallpapers. Her significant achievements included a tile mural for the Susan Lawrence School in east London, a 'live exhibit' for the Festival of Britain, a tile mural at the British Pavilion at the 1958 Bruxelles Exhibition, and tile designs for Sir Frederick Gibberd at London Heathrow Airport Underground Station. The massive post-war increase in new public architecture led to a large number of commissions for tile designs, particularly for new schools and colleges. Her tile designs were produced commercially by Carter and Sons of Poole, Dorset